I spent most of September 2010 traveling around Nova Scotia, particularly Cape Breton. Discussed it here and here. This two-CD set was my constant traveling companion, the soundtrack of my journey. I still play it at home and on the radio, as a reminder of one of the best times of my life. Hence a Desert Island Disc.

And yes, it’s another greatest-hits compilation.

From the beginning it was clear the group was about so much more than just music, that there was a tradition to be respected and passed on, but not without ensuring its audience had a damn good time in the process. Young and energetic, The Rankins showed the rest of the country, and much of the world, that Cape Breton music was strong and vital and had a relevant place in the commercial market…The Rankins had a tricky balancing act on their hands, satisfying the folk music fans that bought the first 10,000 or so copies of their first two CDs and helped raise their music industry profile, and meeting the needs of a major label with commercial airplay that enabled them to fill arenas across the country…The Rankins were about tearing down barriers and bringing the music of their home to new listeners. – Stephen Cooke, Halifax Chronicle-Herald

“Souvenir 1989—1998” is a two-disc greatest hits compilation that came out in 2003. It is a great overview of the decade when the Rankin Family rose to prominence in the Canadian pop/folk scene and opened a floodgate of likeminded musicians who brought Celtic influences into the contemporary scene. It is evenly focused on their entire career, and also serves as a memorial to the late John Morris Rankin (1959-2000). Mrs. homercat introduced me to The Rankins and I love them. Just one listen to “You Feel the Same Way Too,” “Borders and Time,” or “The Mull River Shuffle” and you’ll be hooked too. The family is blessed with wonderful voices, particularly the women. The harmony is dense and absolutely pure. The voices are clear and crisp, the lyrics are full of meaning, and the music is just fantastic. The men in the group are excellent instrumentalists and the late John Morris’s fiddle playing is superb in an authentic Gaelic style. Truly one of Canada’s best kept secrets. – homercat.blogspot.com

The Rankin clan hails from Mabou, a town of 1,300 on the western coast of Cape Breton. A family of 12, they all performed in various groupings, at ceilighs and fairs, across the island for years and years. The youngest five got national attention (in Canada) and signed with EMI in 1989. So they became another incredibly talented band that was huge in Canada, but barely known in the US. See also: Great Big Sea, Blue Rodeo, Sloan, et al.

The band went on hiatus in 1998, took on side projects, and raised their families. As homercat mentioned above: in 2000 John Morris Rankin, the older brother and virtuosic instrumentalist, was killed in a roadside accident not far from his home in Mabou. The remaining members were in shock to say the least. Since then Jimmy, Cookie, Raylene, and Heather have reunited as a foursome and in smaller groups, and continue to take on solo and other side projects. “Souvenir” chronicles the music made by all five of them together.

The Rankins’ style of tight harmonies, outstanding instrumentation, and Celtic influences has become known in Canada as “East Coast Music.” This is in part because it’s primarily based in Atlantic Canada, the Maritimes and Newfoundland and Labrador with their strong Scottish and Irish populations. Although some Acadian elements have seeped into the music as well. According to wikipedia:

The Maritime Provinces are best known for the strong influence of Scottish and Irish settlers on the sound of the region’s traditional music. This Celtic-derived music is most strongly expressed on Cape Breton Island, which is especially well known for the Scottish influx in the late 18th century and early 19th century. Scottish-style fiddle music, sometimes accompanied by the piano, was popular at the time, and these traditions survive today. In some cases, like Cape Breton Island, Scottish folk traditions are better-maintained than in Scotland itself…New Brunswick has seen a roots revival of their own Acadian traditions, dating back to before the French settlers of the area were expelled to Louisiana and became the Cajuns…While closely related to the three Maritime provinces, Newfoundland and Labrador is culturally and politically separate. However, the two areas share a regional awards show, the East Coast Music Awards, and a common musical heritage.

As I say, this CD set was my traveling buddy throughout Nova Scotia. With a backdrop like that it’s obvious why it has a special place in my collection, but I’m not fickle; I continue to listen now that I’m back home.

John Morris’s contribution was his amazing musicianship on piano, guitar, and fiddle. He rarely took a lead vocal, but the other four made up for it. Cookie (real name, Carol) takes the lead on several numbers, including “Borders And Time.” 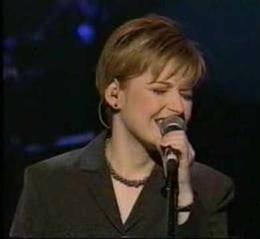