← Canadian readers: represent.
I put a “tip jar” on my sidebar. →

Oh, this is too cool. Home brew being made at the White House.

My Prez is a beer geek!

President Barack Obama has become one of the first modern day US presidents known for enjoying a cold beer that is brewed and tapped right at 1600 Pennsylvania Avenue.

Obama aides on Tuesday confirmed the small brewery during a three-day re-election campaign tour across Iowa. An official admitted the Obamas have their own alcoholic beverage made and kept in stock at the White House.

Revelations about the White House beer came to light after the president gave a bottle of it to a patron at a coffee shop he was visiting in Iowa.

The beer, named White House Honey Ale, comes in both a light and dark variety. The honey portion of the drink is taken from first lady Michelle Obama’s garden beehive.

Added a pic of the bottle! 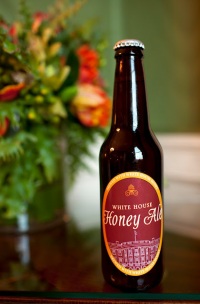