← Rockin’ the 902: Like Lake Mille Lacs, with lobsters
My family has a thing about owls. →

Rockin’ the 902: I’ve spent more time in church this week

than I have in the past year. 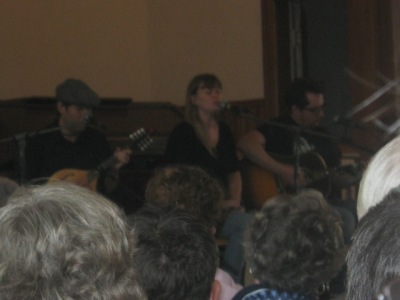 Every morning this week Wendy Bergfeldt from CBC Cape Breton has hosted a session with Celtic Colours performers at the little bitty Knox Presbyterian Church in Baddeck. These are for future broadcast on Wendy’s afternoon program “Mainstreet Cape Breton.” Literally, they don’t know who’s going to play till they get there.

This morning I lucked out, big time. The first group to perform was The Once. I’d never heard them before, but so far they’re the best of the fest for me.

Newfoundlanders, like Great Big Sea, so you know that can’t be bad. In fact, Bob Hallett from GBS helped produce their newest CD. (Postscript: I geeked out fanboy-style, chatting with Phil Churchill and Andrew Dale in the hallway at the Festival Club. Mentioned that I was impressed that Hallett participated in the project. They looked at one another and said, “Actually.. he’s our manager.” That, folks, is so damn cool.)

From YouTube, a couple of their songs. The first one you’ll probably recognize. The second also, if you know Leonard Cohen.