← Song of the day: “Captain Kidd” by Great Big Sea
I’m not one to blather about holidays. →

My radio role model as a young’un

was the one, the only, the impossible-to-replace Rob Sherwood. (A/K/A “Uncle Rob,” A/K/A “Robby Baby.”) In the 60s and 70s he had a hand in the success of virtually every Twin Cities rock’n’roll radio station, and many outstate as well. I’ve had the good fortune of swapping a few emails with him over the years, and told him that he influenced me to become a radio professional.

Here’s one of his airchecks from the legendary U100. To give you a handle on how old this is, note that they didn’t even give the area code with “the number to call” … 612 was the only one in Central Minnesota at the time. Note also how they took the time to acknowledge callers’ pledges of $1 and $2! 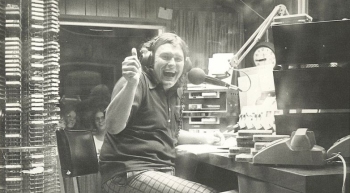 Often I share this quote (paraphrased slightly for context) from his website. It captures perfectly what I love about being in radio.

I love being a DJ. I laugh while doing it, because doing it makes me happy. I smile when I’m on the air. When I’m behind that microphone, my spirit soars. Better than anything. As good as it gets. I want everyone who listens to be there with me.

If someday some young’un were to tell me that he or she went into radio because I made it sound fun and important and enriching, I’d be over the moon with happiness. If someone ever has influenced you to do something you’re proud of, find a way to let that person know. Write a fanboy letter, post on their website, anything. Do it now. You may never have another chance.

And as a postscript, from his website, here’s Rob Sherwood’s theory of how memory works. It’s probably the most accurate one I’ve ever read… that I can remember, anyway…

I imagine there are thousands, hundreds of thousands of little memory boxes in my brain. Each box contains the info of our life, but most of it is stored way way at the back of the pile. Otherwise, we would be overwhelmed by minutia. Is it more important to have a memory of my Mother’s perfume than the TV show I watched on May 13, 1955? It depends.

2 Comments on “My radio role model as a young’un”