My lifelong friend/brother-in-law John Godfrey, who with my sister Colleen founded KBEK, used to give me a rash of shit about my taste in radio stations. He observed that it was always the kiss of death for a station’s format if I decided it was my new favorite. Once I anoint it so, he continued, the station almost instantly discovers that its format is untenable and unprofitable and either (a) changes formats or (b) goes out of business.

There’s probably more truth in that than I care to admit. The radio stations I’ve loved over the years tacked toward the “modern rock” format. Unfortunately, there’s a built-in self-limiting circuit in modern rock: that is, alt-rock fans deeply cherish their alt status and are terrified of being thought of as “mainstream.” Once a radio station legitimizes their music by building a format around it, whoops! It’s instantly too entrenched to be alt anymore. It’s like an Anarchy Center with set business hours. Buh-bye. Like a high school kid told me about ten years ago, “If Nine Inch Nails are so alternative, why is my whole senior class here at the concert?” (No wonder radio programmers throw their hands in the air and scurry to the predictability of “new country” whenever the economy goes soft.) 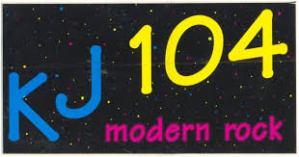 This was certainly true of the late lamented KJ 104, from 1990 till 1995 the first true alternative station in the Twin Cities. Critics loved it, fans adored it, but Arbitron ratings couldn’t even track it and sponsors didn’t support it. So, guess what? Overnight one night it became “New Country Thunder 104.1.” Just what the Twin Cities needed: another interchangeable, indistinguishable source of Garth Brooks, Toby Keith, and Reba McIntyre.

While it lasted, though, KJ 104 introduced me to some amazing artists and songs. One of them is today’s Desert Island Single: “Golden Blunders” by The Posies. Power-pop bands typically channel the spirits of The Five B’s: The Beatles, The Byrds, The Beach Boys, Badfinger, and/or Big Star. This song goes in quite a different direction. Imagine The Hollies from 1966 jamming with  R.E.M. from 1983 and The Smithereens from 1988, and there you have The Posies. This song has a timelessness about it, and could have been a radio hit in just about any era. In fact Ringo Starr covered it a few years later, and still features it in his All-Starr Band shows.

We’ve all made a golden blunder or three over the years, a colossal misjudgement with ramifications beyond the immediate. I once described 10,000 Maniacs as playing “happy songs about sad topics.” That pretty much describes “Golden Blunders” too, a song about a couple who commit too quickly, and under pressure, and experience discontent and disappointment and regret. Wed in haste, repent in leisure, as the saying used to go.

Disappointment breeds contempt, it make you feel inept
Never thought you’d feel alone at home
His and hers forevermore, throw your freedom out of the door
Before you find out what it’s for

Honeymoons will never start, bonds will blow apart
Just as fast as they were made
Men and women please beware: don’t pretend you care
Nothing lasts when nothing’s there

“Golden Blunders” is a deceptively listenable song about profound adult emotions and the fragility of grown-up relationships. It stays with you. A Desert Island Single to be sure.

4 Comments on “Desert Island Singles: “Golden Blunders” by The Posies (1990)”