← Get your Irish on, part I
Ginger People Ginger Spread. NOM NOM NOM → 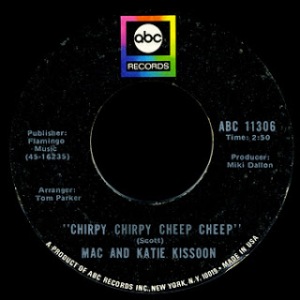 Three or four artists recorded versions of this song in Europe between 1970 and 1971, including the composer Lally Scott. Three of them were wildly popular: one by the Scottish band Middle Of The Road even went to #1.  This is the only version that didn’t even chart in the UK. It was the only version to jump the pond, though, and became a Top 20 hit here in 1971.

In the early 70s Mac and Katie Kissoon were the Donny and Marie of the UK. Born in the West Indes, their family emigrated to England when they were teenagers. They started recording as background singers for various acts, and eventually cut a few singles as headliners. Their singles did passing well in the UK but were huge in the Netherlands, Belgium, and France. This was their only US hit. They both carry on as backup singers; Katie has toured with Van Morrison, Elton John, Eric Clapton, George Harrison, and Roger Waters.

Like Shonen Knife, this just flat-out makes me happy. My adorable niece Phoebe came home from day care singing the song one day, so then I surprised her with a copy of the mp3 and we all ended up grooving to it!  It’s what swing musicians call “in the pocket”: it has a rhythm riff that is infectious and matches perfectly to the melody.