← I need a Junior Woodchuck Guide.
Relationships Are Games Of Calvinball →

Desert Island Discs: “Drink A Toast To Innocence: A Tribute To Lite Rock” (2013) 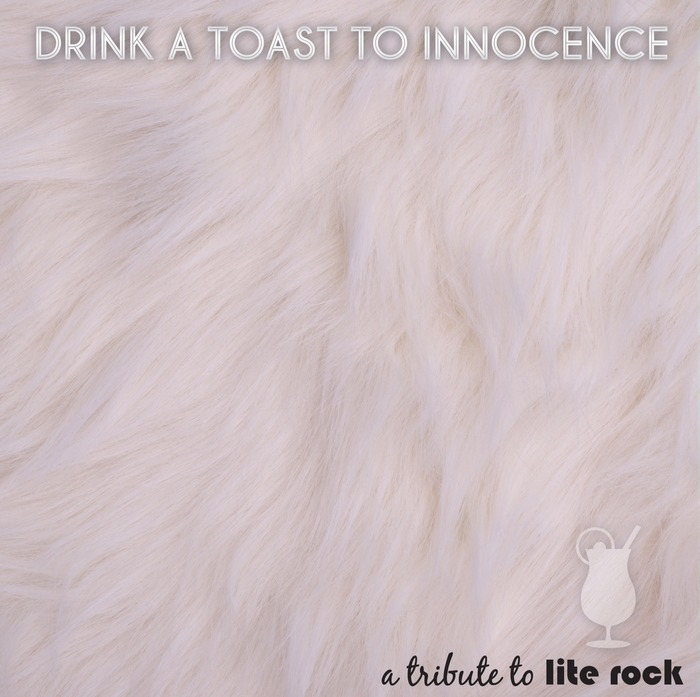 If you’ve read this blog very long, you’ve seen that I work in radio. I help my sister Colleen run the small-market radio station she owns.  It’s the thing that gives me the most joy in life. She and her late husband John first went on the air right about this time of year back in 1995, eighteen years ago. John was not only my brother-in-law and my boss, but also my oldest friend – – since grade seven, when Lyndon Johnson was President. Yeah, we go back a ways.

John was a man of convictions. One of his most consistent was that his radio station should never, ever play cover versions of songs. Only originals. John and I butted heads about this many times over the years: he said he had heard too many awful, misguided, washed-out covers through the years, and wanted none of it. He appreciated good production values in music, so couldn’t stand it when an artist covered one of his favorite songs and mangled it beyond enjoyability. (He nearly suffered apoplexy over Patti LaBelle and The Blue Belles’ R and B cover of “Somewhere Over The Rainbow.”)

He had a moment of cognitive dissonance when I observed that the chart singles by his all-time favorite band, Herman’s Hermits, were virtually all covers. But he stood firm, and through skulduggery and time I snuck some well-crafted covers onto the playlist.

So why bring this up? Because, despite his no-covers pronouncements, John would have loved this album: “Drink A Toast To Innocence: A Tribute To Lite Rock.” Bill Sammons in his excellent blog “Kool Kovers” writes something my friend would have endorsed heartily: “The best cover versions are, as my wife says, different enough so it’s fresh but the same enough to where you can sing along if you want.”

Executive producer Andrew Curry drew inspiration from a Facebook thread that nominated the greatest lite rock songs of all time: the soundtrack of his youth, as he put it. The idea of a tribute album began to germinate, under the umbrella name “Monsters Of Lite Rock,” and Andrew successfully pitched the project on the fund-raising website Kickstarter.

Mad props also to the lovely and talented Elizabeth Racz (“Miss Klaatu”), who served ably as Associate Producer. Nobody could have done better.

A while back I wrote about the project, and was gratified to see Andrew achieve his funding goal in just a few weeks. There was a definite buzz around this project, especially in the power pop community. Thanks to Andrew, by the way, for the go-ahead to stream a few of the songs on this blog. Trust me, I’m confident that you’ll want the whole album. Go to Bandcamp.

In different hands this album might have become an exercise in campy excess and parody. Andrew avoids that, as everyone’s genuine affection for these songs comes through from the very first track. To quote reviewer Jaimie Vernon: “This is not a joke, folks. The recreations are done with love and devotion. The result is top notch! Highly recommended.”

Long-time Facebook pal and KBEK-FM favorite Eytan Mirsky conjures up a cinematic rendition of one of the quintessential lite rock hits, “Escape (The Pina Colada Song)” by Rupert Holmes. Eytan brings the right element of wry humor to this chronicle of… well, thwarted two-timing. (A shout-out to fellow FB pal, producer Jon Gordon.)

One of the many stellar tracks on this album comes from Vegas With Randolph, with their take on Little River Band’s “Cool Change.” Once again, from Bill Sammons’ “Kool Kovers”:

THIS, my friends, is how to do a cover! It completely respects the song, keeping all signature parts intact. Yet it sounds like the band who’s playing the song: putting their identity on it, but not in an overwhelming way.

Back in the day, lite rock bore the (occasionally deserved) mantle of being too saccharine. And let’s face it, some of the originals were a bit milquetoast and begged to get the wimpiness knocked out of them. The Davenports do just that – they bring drive and energy to Randy Vanwarmer’s “Just When I Needed You Most” that the original needed in the worst way.

One of my most pleasant discoveries is Lisa Mychols’ turn on “Don’t Give Up On Us.” Lisa adds crunch and punch and multiple layers to the song, and you believe it in a way that David Soul never quite pulled off.

Like greatest-hits albums, tribute albums are a hit-or-miss affair. Many are bland, a few are innovative, and a very small handful approach excellence. “Drink A Toast To Innocence” is in that category. It’ll catapult you back to a happy time.

Bandcamp is the place to go for this album. Also check out the Monsters Of Lite Rock website.

And by the way: all these tracks are now in hot rotation on our station. I’m sure John concurs. Somewhere out there, he’s probably rockin’ out to “I’m Henry VIII, I Am.” A cover, by the way.