← Says it all.
An unintended side benefit to today’s DOMA ruling → 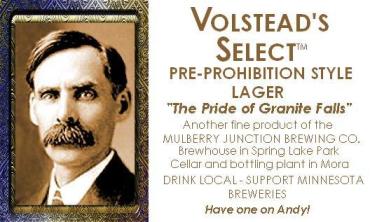 Andrew Volstead was a Republican Congressman from the 7th Congressional District in Minnesota. He sponsored the bill that forever bears his name, the Volstead Act, which created Prohibition. He also authored a bill that allows farmers to form cooperatives. Some good, some bad. After his time in Congress he returned to private law practice in Granite Falls, a small town in western Minnesota. He rests in the town cemetery.

My homebrewing buddies and I, collectively known as the Mulberry Junction Brewing Company, brewed this lager almost exactly one year ago. And we named it for Andy.

I’ve sampled a bottle or two since then. And just now I opened up another one, a full year after brewing day.

Thanks for the inspiration, Andy. NOM NOM NOM.