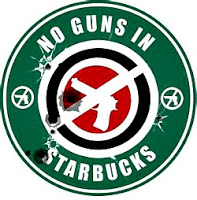 (Disclaimer: I don’t smoke. The following is a hypothetical, fueled by a discussion at Democratic Underground.)

If I were to enter a Starbucks, order a coffee, sit down, and light up a cigarette… I would certainly be asked to leave.

This week Starbucks announced a very sensible policy where they request that their patrons not bring guns into their stores, even in states where open carry is allowed. The fact that it is a request, not an outright ban, adds to its sensibility. CEO Howard Schultz posted a letter on the corporate website that says, in part:

For these reasons, today we are respectfully requesting that customers no longer bring firearms into our stores or outdoor seating areas — even in states where “open carry” is permitted — unless they are authorized law enforcement personnel.

I would like to clarify two points. First, this is a request and not an outright ban. Why? Because we want to give responsible gun owners the chance to respect our request — and also because enforcing a ban would potentially require our partners to confront armed customers, and that is not a role I am comfortable asking Starbucks partners to take on.

Second, we know we cannot satisfy everyone. For those who oppose “open carry,” we believe the legislative and policy-making process is the proper arena for this debate, not our stores. For those who champion “open carry,” please respect that Starbucks stores are places where everyone should feel relaxed and comfortable. The presence of a weapon in our stores is unsettling and upsetting for many of our customers.

Second-hand smoke is an irritant to others with documented long-term accumulated risk. I don’t care to be around it myself. The immediate effect it may have on other people at the moment of contact, however, is admittedly small. And yet I would certainly be asked to leave if I lit up inside a Starbucks store.

Second-hand smoke does not begin to approach the very real capability to kill everyone in the store in a few seconds. Hell, if I really worked at it and started a fire with my cigarette, it still would not pose the level of threat presented by someone with a firearm.

Usually, someone carrying a gun up to the counter at a store is a sign that a robbery is in progress. Somehow, the gun fanatics don’t seem to understand how that upsets people. A good decision by Starbucks.