What I was looking for: The Cape Clear Look-off
Image from anotherdayofgrace.blogspot.com

For months I’ve been reading about Cape Clear, a small, isolated, wooded area with an astounding look-off view over Cape Breton. Recently my friend Leah Noble wrote about it in her blog Dream Big Cape Breton (follow it, folks, it’s awesome). She wrote:

The Highland Road, for those of you who don’t know, is a series of roads put in by the logging company to harvest wood from the interior of the Cape Breton Highlands. (You can read more about this part of the island here.) My Dad, who works in the woods doing tree-planting, laying out cuts, and other stuff I don’t know too much about, is frequently taking the Highland Road to work. You get on it in Middle River, and you can drive up to Cheticamp or Wreck Cove on it. They are all dirt roads, and they are marked, somewhat. Once you’re off the main road, though, it’s kind of a maze. Other than logging trucks, you’re also likely to encounter hunters, snowmobilers, or dirt bikers, depending on the season.

Blogger Andrea, in her blog Another Day of Grace, wrote this:

We again made our way deep into the Highlands in search of Cape Clear Look-off, and this time we struck gold! In no time, we found what we had been looking for for almost two years and as promised, the view was spectacular! We were on top of the mountains, high above the valleys and raging rivers in the foothills. It felt like we were on top of the world!

Well, I knew it would be difficult to find but I had to try. I found the coordinates on a Canadian DNR website, punched them in to my faithful GPS, and set off on the Highland Road.

It was an hour’s drive on logging roads. I had a rental car and didn’t want to do damage to it (or to myself, as an aside). Plus, since I’d been avoiding exorbitant roaming charges, I hadn’t brought my smartphone along either. This may not have been the best decision I ever made.

I saw a few other vehicles for the first half-hour of the trip, including a Nova Scotia DNR ranger who asked if I was going hunting. No, I replied, I’m off in search of Cape Clear. He nodded and assured me I was on the right road.

I was the only vehicle anywhere around for the last half-hour. Roads got rougher and narrower, and featured washed-out patches of uncertain depth. A few hand-painted signs confirmed that I was in the vicinity of Cape Clear. But I never did make it to the look-off. The next day when I met Leah for coffee, she told me I’d probably gotten close but that it is indeed hard to find.

So, no look-off. Was it a waste of time? Did I feel cheated? Absolutely not. This part of the Highland Road is absolutely the most still and the quietest place I have ever been in. It was like an isolation chamber.

I sat for awhile and just soaked up the quiet. Almost blissful.

No, I wasn’t cheated. Next visit, though, I will find that look-off. 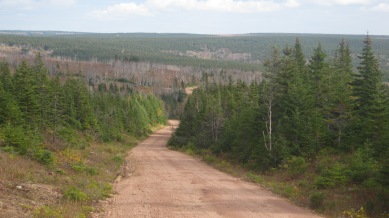 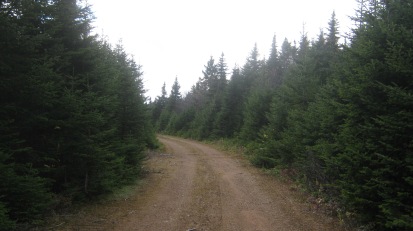 And bring my smartphone.