← “This Obamacare thing isn’t working.” Yeah. Like after, you know, six weeks.
Wisdom. → 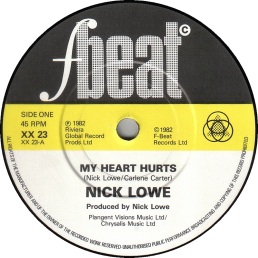 Nick Lowe’s career is a textbook example of the unfairness and inaccuracy of the term “one-hit wonder.” Most music fans remember “Cruel To Be Kind,” his only US Top Twenty single. Many know that he wrote and recorded “(What’s So Funny ‘Bout) Peace, Love, and Understanding,” one of Elvis Costello’s signature tunes, and “I Knew The Bride (When She Used To Rock’n’Roll),” a hit for Dave Edmunds that is now a mainstay at wedding-reception dances. In 2011 The New York Times claimed, “The 40-year career of the English singer-songwriter Nick Lowe constitutes a paradox: the songs he has written are better known than he is.”

In 1982 Lowe was married to Carlene Carter, daughter of June Carter Cash and stepdaughter of Johnny Cash. His band Rockpile, which also featured Edmunds and gained enthusiastic critical if not commercial raves, had split up. Since both Lowe and Edmunds had different contracts with different labels and different managers, only one album – 1980’s “Seconds Of Pleasure” –  was ever credited to Rockpile. However, a handful of albums credited to Lowe and Edmunds were Rockpile albums at least in part.

Alas, all hills must have a down slope. Due to disagreements and tempers, Rockpile broke up after this tremendous release. Go fig! In my opinion I could see where this breakup was inevitable, simply because of the way Rockpile was running with two very talented musicians running first and second in alternation all the time. Although Edmunds states that there were no ego trips going on, I believe that egos did strain the music to a point of separation. Edmunds and Lowe were an incredible team. This group’s breakup would be a terrible loss to the music world, because together they were just as powerful as they were in their solo environments. – Paula M. Sherman, In Music We Trust

Edmunds was serious and dedicated to detail, to the point of single-handedly re-creating the sound of Phil Spector and Sun Studios on his early solo albums. On the other hand, there was a reason why Lowe was given the nickname “Basher” — he loved to get in the studio and bash out the music, preserving the energy, passion, and humor of a band at its peak. Eventually, this caused great conflict between the two — the band’s split was anything but friendly… – Stephen Thomas Erlewine, Allmusic

So by 1982 Rockpile was history and Lowe lined up Carlene and a number of friends to make “Nick The Knife,” including former Rockpilers Billy Bremner and Terry Williams. Unfortunately out of print, this album is excellent. His singing, sense of melody, and sense of humor are all there. “My Heart Hurts” never charted in the US or UK, but nonetheless remains a must-own single.