← Goldang kids and their hippety-hop music.. Hey! Get offa my lawn!
Wisdom. →

Desert Island Singles: “This Beat Goes On/ Switchin’ To Glide” by The Kings (1980)

As far as “This Beat Goes On/Switchin’ To Glide” is concerned, where it stands out for me is the transition between one section of the song and the next, creating a rock song that is instantly accessible with miles of pop appeal, along with being ambitious on the arrangement front that is bolstered by solid musicianship. In short, the Kings were pub rock. And when new wave came along, and was embraced by top forty radio at the end of the 1970s, the Kings were ripe for radio play, first in Canada and eventually in the States, too.- Rob Jones, “The Delete Bin” 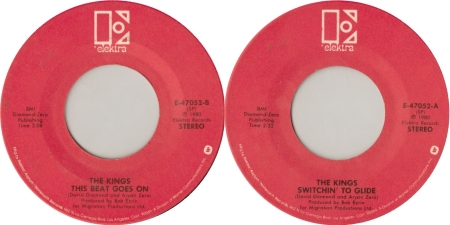 It was the summer of 1980. I was about to start a grad program, and my roommate/ best bud was about to get married. In other words, it was a endless summer of celebrations. The radio, thankfully, was shrugging off disco and “urban cowboy” music and actually started playing some kickass rock’n’roll. And this song was all over the radio.

The Kings were a bar band from Vancouver in the late 70s. In 1980 they made their way to Toronto to record an album and hooked up with legendary producer Bob Ezrin (Pink Floyd, Alice Cooper, Lou Reed, Kiss, Peter Gabriel). They struck gold the first time out. The chunky guitar riff and the Farfisa organ give it a timeless, pre-aged sound.

Despite the fact that disco had popularized extended play 12″ vinyl singles, and extended tracks had been accepted since the free-form FM radio days in the ’60s, Elektra didn’t know what to do with this ht they had on their hands. They pushed “Switchin’ To Glide” as the A-side of the single, starting with the phrase “Nothin’ matters but the weekend..”. Radio DJs who heard the album track soon figured out how to “loop” the B-side, “This Beat Goes On,” into the other track. Sometimes they had to get two copies spinning at once on separate turntables and drop the needle at precisely the right time. It was tough back in those days, kids; tough, I tells ya.

In The Kings’ minds “This Beat” and “Switchin’” were always supposed to be together as a segue. They were not too happy when Elektra Records decided to release “Switchin’” on its own. It did get some play but finally, after pressure from the band, the segue was released and it was only then that radio really picked up on it.

Somehow “This Beat Goes On/Switchin’ To Glide” stayed on the Billboard charts for six months that year. Ten years later it started getting major play all over again on the rocker stations in Chicago. With a few tweaks to the lineup, The Kings are still going strong. But this is the song that rocked my world in the summer of 1980, heard the way it’s supposed to. A Desert Island Single to be sure: because, nothin’ matters but the weekend from a Tuesday point of view.