Overheard: a woman at a bar

Ground up and kept in the freezer?

Sitting in the can until you need them to do something?

Quick confession: occasionally I experience a flare-up of rosacea. I’ve become adept at identifying and avoiding triggers. Flare-ups last only a couple of days and then fade away, but during those couple of days I look like I have moderate facial sunburn.

Needless to say, I become self-conscious at those times. I don’t care to draw much attention to myself under normal circumstances, and even less so when I look like Mr. Tomato Head. In particular I avoid social situations where I might engage with attractive women. 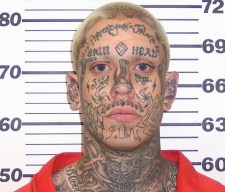 The dude wasn’t quite this bad, but close.
Image from listabuzz.com

Until the other day.

I was dining at a bar and grill in my small town, when this absolutely drop-dead gorgeous woman walked in. This is something not commonly seen in outstate Minnesota. All eyes turned to look at her.. and at the dude she was with. Who had tattoos all over his face. All. Over. His. Face.

This is also something not commonly seen in outstate Minnesota. At least one patron wondered aloud if the circus was in town.

“Love is blind,” as the saying goes, and there’s no accounting for taste. Maybe he’s just the dreamiest guy deep down inside, and no one can see it in him but her. Maybe she fell in love with him on-line. Maybe she owes him money. Maybe she lost a bet. Maybe this was a cruel sorority prank. I don’t know.

But I’ll tell you one thing: I sure as hell ain’t gonna worry about rosacea anymore.

“The worst bass player in rock’n’roll gets laid more than the best comedian.” – Jon Stewart

“There’s a joke here somewhere, and it’s on me.” – Bruce Springsteen

Women think guys they are attracted to are hilarious. You’ve all seen it: go to any party and you will find a woman cackling hysterically at some douche-nozzle’s douchey jokes that aren’t particularly funny. The Conventional Wisdom ™ is that women love funny guys. A guy who can make her laugh will make her feel good, so that’s what will win her heart. The various Nationally Advertised Dating Websites ® put up posts about it just about all the time, so it must be true, right? Right…?

Well, it’s kind of true, but in a bizarre Alice-Through-The-Looking-Glass, chicken-and-egg sort of weird alchemy. Not in a way that will help if you don’t already have the benefit of attraction going in your favor.

The woman cackling at the douche-nozzle at the party? She thinks his jokes are funny. She thinks he’s Bill Burr, Chris Rock, and Louis CK all wrapped up in one. Why? Because, sadly, she’s conflating cause and effect. Though she believes she’s attracted to funny guys, she’s got it backwards. She actually thinks attractive guys are funny… whether they are or not. She feels attraction to him, and everyone tells her funny guys are attractive, so..  voilá.. he’s the next Jerry Seinfeld, even if he’s telling jokes remembered from his junior-high cafeteria.

So developing the sense of humor, the wry one-liners, the flawless comic timing won’t help you attract the woman. If she’s already attracted to you, however, she’ll attribute those qualities to you even if you’re reciting knock-knock jokes you copied onto your palm from the back pages of Reader’s Digest. (“Laughter: The Best Medicine,” my ass. What, they never heard of penicillin?!)

It’s great to be funny. The world needs more funny. It’s a great skill if you have it naturally, and great to cultivate it if you don’t. Seriously, be funny. Just don’t let yourself believe that it’s the Golden Road to Relationship Success. Don’t let the joke be on you.

Her: “I think it’s time we, you know, have ‘that chemistry conversation’.”

Happy VD to you all.

(Reprinted from The Harvard Lampoon Online.)

It is with sincere regret that I must inform you that I cannot go out with you. Though dinner on Saturday sounds enticing, I am unable to accept your offer at this time.

You should know that this year I had a record number of people asking me out, and the pool was exceptionally strong. I was unable therefore to accommodate many qualified people. I am only one woman!

People asking me out this year came from all fifty states and thirty-seven foreign countries. They included a record number of underrepresented minorities, athletes of thirty-two NCAA-recognized sports, a Scripps National Spelling Bee Champion, and several downright hotties. This year, for the first time, I will go out with more women than men, truly an important moment in my history.

Thank you so much for your interest, and please let me know if you have any questions or concerns. Although I am unable to accommodate you at this time, I offer best wishes for your future success with the woman you eventually enter.

Reblog: You’re Not Just Going To Die Alone – You’ll Be Totally Miserable Too

Hey there. How’s your day going so far? Have you spent much time thinking about how you’re going to die alone in your apartment, face down in a bowl of the soggy cereal you’re eating for dinner because why would you ever cook a proper meal when it’s just you? Well, allow science to make your day even better by telling you that if you live alone, you are virtually guaranteed to be incredibly depressed. But don’t worry, it’s…oh, fuck it. There’s no way to sugarcoat it. It’s all so pointless.

The risk of depression, measured by people taking antidepressants, is almost 80% higher for those living alone compared to people living in any kind of social or family group.For women a third of this risk was attributable to sociodemographic factors, such as lack of education and low income. For men the biggest contributing factors included poor job climate, lack of support at the work place or in their private lives, and heavy drinking. – Finnish Institute of Occupational Health