From the brilliant Adam Dawson:

“Universal background checks would be a logistical nightmare.”

Then let it be a logistical nightmare.

At this point the argument seems to be: it it is difficult, or doesn’t work at a rate of 100%, it’s just too much of a cross for gun owners to carry around.

I’m done worrying about whether or not gun owners are inconvenienced in their hobby. That is the least of my concerns.

It’s been eight days since he was inaugurated. He’s engaged in unconstitutional denial of rights, lies, treason, buffoonery, gaslighting, cronyism, and subversion.

No, the other candidate was NOT “even worse.” Shut the f**k up about that.

He is insane. He is tearing this country apart. He is making it into something that is not America. And no, his predecessor was NOT “just as bad.” Shut the f**k up about that too.

It’s down to this. Either you stand with America, or you defend him. Simple.

Attendance will be taken.

“And the blood of your children is all that I require.”

I have several good friends, dear friends, who are still undecided about who to vote for next month. I will never, ever forsake a friendship over politics. My friends are too valuable to me to discard over a principled agreement.

That said: indirectly supporting Trump by sitting out the election is the same as intentionally supporting him. This is no longer a principled agreement. I understand wanting to vote your conscience. But I don’t understand how your conscience will leave you alone if you don’t do everything you can to prevent him from becoming President.

“You mean… you could have helped prevent THIS… and you DIDN’T?”

I had an online political discussion this morning with a friend, an intelligent and thoughtful woman with extensive firsthand knowledge about the workings of Washington. Not surprisingly, the discussion was about the two presumptive Presidential nominees. I lamented to her the following:

“This time around, I wish I was voting FOR someone rather than AGAINST Donald Trump.”

I pondered this for most of the day, chewed on it like a hungry puppy with a Nylabone. Then, as if by divine grace, I had an epiphany. I knew what to do.

This fall, I am going to vote for Vice President.

I’m quite serious. It is very likely that neither of the presumptive nominees will still be President by 2020.

Hillary is already under investigation by the FBI about the private email server. These lads don’t give out slaps on the wrist. There’s also the possibility of an investigation of money-changing at the Clinton Foundation. Even if nothing comes of these investigations, it will divert a ginormous amount of her time and energy. In addition, she made an assload of money giving speeches to Goldman Sachs and other investment firms – who don’t typically give out assloads of money without expecting a ROI – and has stubbornly refused to release the transcripts of these speeches, which has not played well with the Democratic branch of the Democratic Party. Plus, and maybe most importantly, House Republicans have ALREADY began drawing up articles of impeachment for Hillary, and they don’t exactly dilly-dally. She will have an enormously difficult time getting through the term, and anyone who does not recognize this is either naive or willfully deceived.

Trump? Judas Priest on a popsicle stick, he’s given us at least 20 good reasons to impeach his sorry ass already. And the pressure to impeach won’t be coming just from the Dems — there are plenty of Reeps who will be eager to see him go down as well. It’s questionable whether his candidacy will survive the GOP convention. Plus he’s under investigation too, about Trump University, and he hasn’t exactly helped his cause by openly insulting federal judges. Plus he refuses to release his tax returns, and it’s not hard to figure out why. And just as importantly, Trump may very well get overwhelmed and/or bored – and decide to bail. He has the attention span of a goldfish. Though it’s dangerous to underestimate the carnival barker, the odds are good he also may not see 2020 in the White House.

So there you have it. A simple, airtight, and elegant solution. I won’t be voting AGAINST Trump – I’ll be voting FOR the best Veep.

This just in: Donald Trump announces his running mate.

Bernie Sanders in his unforgettable role as George Costanza.

“I am saying no to the politics of fear that imagine a thousand terrors lurking in restrooms and around corners, to perpetuate the necessary narrative of a sky that is always falling.” 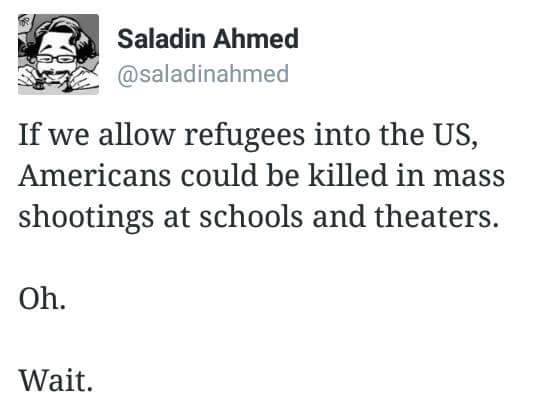