It was fifty years ago today

That morning the whole family was in the car, a big blue Ford station wagon. On our way home from church, on a freezing-cold Minnesota February day. The radio was tuned to KDAL-AM, the local CBS affiliate, and an announcer was talking about The Ed Sullivan Show and these four rock’n’roll singers from England who had LONG HAIR and MADE ALL THE GIRLS SCREAM.

My dad said, “We’ll have to watch them on TV tonight.”

My family has a thing about owls. 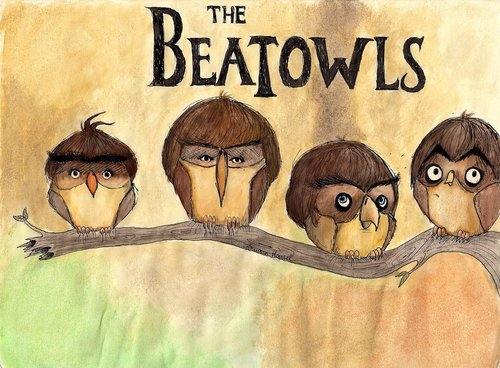 My favorite version of “Stairway To Heaven.”

“Ladies and gentlemen – THE BEATNIX!”

Why there won’t likely be “another Beatles”

An excellent blog that I follow is “The Badger Hut.” Today a poster named Jack shared a brilliant insight that’s worth consideration. To wit:

The Beatles were immensely talented. Later, the (music) industry would realize that talent was an optional component, and that new stars could be created more cheaply with studio production techniques and that the fame was all that was truly important to sell records to young women.

The low standard of musical achievement could indicate that much of modern pop music is actually designed to be more of an alpha male burlesque show for women than any sort of actual musical “performance.”

I’ve discussed this on other sites, and there are about a brazillion sites also set up to debate it. Revisionist history. Here’s the scenario:

It’s late summer 1968. George Martin summons you to Abbey Road Studios. He tells you that The Beatles are about to release their next album, the first on their own Apple label, simply called “The Beatles.” However, they’ve recorded twice as many songs as they need for one LP. Sir George is feeling too close to the material and to the lads to make the decision, so wants your help to separate the wheat from the chaff. (Actually he implored the lads to do just that: release “The Beatles” as a single album, with possibly an additional EP for any other songs they simply didn’t want to go unreleased.)

To stick with the conventions of the time, the running time of the album can’t exceed one hour, split between two sides. And to stick with The Beatles’ own conventions, songs should be evenly divided and mostly alternating between John songs and Paul songs. George gets at least one per side, and Ringo gets one song.

To start it out, here’s mine:

There. The album running time is about 54 minutes, almost exactly evenly divided. There’s one song that didn’t appear on the original but was recorded during the same time, “Hey Bulldog,” which deserves a much better fate than being buried in the middle of  Side One of the “Yellow Submarine” soundtrack. There are seven John songs, seven Paul songs, two George songs, and one sung by Ringo (written by John). One of George’s songs closes Side One and Ringo/John’s song closes the whole album.  A Paul song opens Side One and a John song opens Side Two.

That’s how I’d do it. I think it’s a much stronger album than what they released. How would you go about doing it? Discuss. 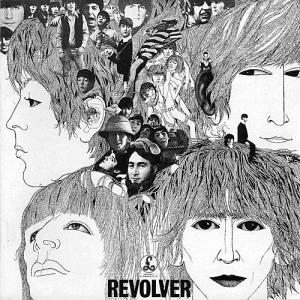 “Albums” (I guess they’re still called that) which you should own, or at least listen to once in your life. Starting it out with the Liverpool lads, their only album from 1966: “Revolver.”

1966 was a kickass year for rock albums, and quite possibly one of the best years ever for rock. Dylan, the Stones, the Beach Boys, the Kinks, the Byrds, the Lovin’ Spoonful, and Buffalo Springfield put out landmark records that year. In large part they were all trying to keep up with the Beatles, who quit touring that year to concentrate on record making.

When Dylan heard “Revolver” he told the Beatles: “I get it, you don’t want to be cute anymore.”

Capitol Records, in their weaselly way, chopped up most of the Beatles’ UK albums as a way of spreading the same number of songs over a greater number of albums. If you’ve only heard the Capitol version, you’d think that Lennon didn’t contribute many songs to this album at all. Three of his songs had been released earlier by Capitol on a different album: “I’m Only Sleeping,” “And Your Bird Can Sing,” and “Dr. Robert.” This left him with only two songs on the album, each at the end of a side: “She Said She Said” and “Tomorrow Never Knows.” George had three: “Taxman,” “Love You To” and “I Want To Tell You.” Ringo sang “Yellow Submarine.” That left Paul with five: “Eleanor Rigby,” “Here There and Everywhere,” “Good Day Sunshine,” “For No One,” and “Got To Get You Into My Life.” The Parlophone UK version, the one currently in print, is a far better album.

Really, there isn’t a bad song on this album. George hadn’t gone completely Hindu and Lennon hadn’t completely tripped out yet, and “Love You To”  and “Tomorrow Never Knows” sound very new and different. Paul’s “Got To Get You Into My Life” sounds like it was meant to be recorded by a Motown group. And of course no one could have sung “Yellow Submarine” but Ringo. It’s still part of his concert gig. Lennon throws in one of the best songs he ever wrote: “And Your Bird Can Sing.”

The Beatles were making music that they couldn’t perform on stage anymore. “Sgt. Pepper” may have gotten more attention, the white album and “Abbey Road” were mostly solo songs performed by each of them, but with “Revolver” they still enjoyed experimenting and playing together as a group. If you don’t own a single Beatles album, this is the one to start with.