Said it better than I ever could. 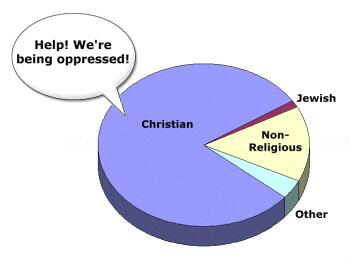 A column called Peace to Men/Women of Good Will by NanceGreggs at Democrats For Progress. Quote:

If you are a sincere follower of the Christ who was beaten, tortured, scourged, crowned with thorns, nailed to a cross, and left to die in excruciating agony… don’t you think equating someone wishing you “Happy Holidays” with persecution is a bit over the top?!

Geez, I would have voted for silk myself.

And does God have a thing against smooth woven fabrics?

Reblog: Living With A Religious Junkie

Hi diddley-do, there, neighbors. Ned Flanders, by way of theprodigalprophet.wordpress.com.

A blogger named Dylan Morrison posted this in an awesome blog called The Prodigal Prophet. This post stirred up some vivid, cringing flashbacks as I recalled my early college phase of “religious” zealotry. Let’s just say that Jesus-freakiness doesn’t make college-age nerds any less nerdy, and can indeed make them even more so.

Well worth a read. Excerpts:

“In this post I’d like to explore some of the difficulties encountered in attempting to relate to an extremely zealous believer, whether within marriage, family circle or workplace. Let me say that the task isn’t an easy one, not easy at all. Perhaps this is why so many divorces eventually occur in marriages where either one of the partners suddenly finds religion, or finally admits to agnosticism.”

“They tend to have a one-track mind. The believer sees absolutely everything through their version of Truth. Nothing is seen as having being or value in itself but is always hooked up to their God agenda. A walk in nature ends up with a pietistic sermon, rather than a wondrous encounter with snow-filled trees or melodious birdsong.”

“They perceive themselves to be closer to God than the non-believer. Sinners saved by grace tend to quickly forget that grace, believing that their belief somehow makes them a bosom buddy of the Divine; a member of His ‘In Group.’ The non believer easily senses this us-them dichotomy even in the closest of families.”

“When I was on my mission for God all those decades ago, folk were hurt by my fiery psyche and I wasn’t even aware of it. Such is the blindness of the zealot in their attempt to save the world whilst ignoring the relational pain of those around them. Hell indeed for those hauled along for the heady religious ride.”

Song of the night: “I Wanna Go To Hell!” by Taylor Ferrera

There’s a certain church around, you know it well
They say a lot of people are going to hell
If you show any tolerance in hell you are put
You got a one way ticket that Westboro will foot

Hell is full of firemen, soldiers, and teachers
Philanthropists and activists and innocent preachers
Celebrities and deities that ask circumcision
Because of this I’ve come to an important decision

Oh, Hell! I wanna go to hell!
So I gotta do what mom and dad say
I gotta love my neighbor even if they are gay
So I can go to hell someday.

Elizabeth the first cause staying single’s a sin
St. Maria Goretti cause she didn’t give in
Spiderman is hell bound because he is fiction
Marlon Brando’s also there because of his diction

Former Bush administrator Rice comma Condi
Tom Hanks, Will Smith, and don’t forget Gandhi!
Hell is for environmentalist Al Gore
Even Christ is bound for hell ’cause he defended a whore

Oh, Hell! I wanna go to hell!
So I gotta do what mom and dad say
I gotta love my neighbor even if they are gay
So I can go to hell someday.

Former Republican official: ‘You can’t be a Christian if you don’t own a gun’

A former Executive Committee member of San Diego’s Republican Party, who now heads the Christian Anti-Defamation Commission, recently told Texas churchgoers that “you can’t be a Christian if you don’t own a gun.”

Speaking to the “Deliver Us From Evil” conference at the Upper Room Church in Keller, Texas earlier this week, Dr. Gary Cass explained that America had a “broken moral compass” because it regularly elected “politicians who could justify killing babies made in the image of God” and “justify redefining God’s institution of marriage.”

“You have not just a right not bear arms, you have a duty. How can you protect yourself, your family or your neighbor if you don’t have a gun? If I’m supposed to love my neighbor and I can’t protect him, what good am I?”

Yup. That’s exactly what Jesus said, all of the time.

“I was driving in Virginia, and I saw a bumper sticker that said ‘I support the NRA’ and right beside it one that said ‘What would Jesus do?’ Not have a fucking gun!” — D.L. Hughley

Image from Charlie H. via photobucket.com

Heaven: a place where nothing ever happens?

(A friend and I were talking about heaven today. She suggested I throw it all down on the blog. She thought I’d say no?! She knows me too well.)

I ain’t no theologian. Just a dude with a blog. Spiritually I’m a progressive Christian with Buddhism rising, who has all these deep thoughts on the loooooong.. drive.. to.. the.. office.

I’m confident of heaven. But I have a different view of heaven than many people do. I’m not sure I believe in a big cloud where we float around with wings and halos and harps. Talking Heads had a song where they sang, “Heaven is a place where nothing ever happens.”

There is a party, everyone is there
Everyone will leave at exactly the same time
When this party’s over, it will start again
It will not be any different, it will be exactly the same
Heaven, heaven is a place
A place where nothing, nothing ever happens

I think “heaven” is not the same as “the hereafter.” Jesus said, “I go to prepare a place for you,” and “In my Father’s house are many mansions.” So I’m pretty firm that there is a hereafter, a restoration of the world, and life after death.

But Jesus had a knack of honing in on the here and now. As He walked and talked, He was interested in displaying the kingdom of God on this earth. He said, “The kingdom of God is within you.” I’m starting to believe that heaven is a way of being with God, living in relationship with God and others, and being at peace with ourselves.

So yeah, I’m confident in the hereafter. And it’s up to all of us to experience heaven now.

And like Will Rogers said, if there are no dogs in “heaven,” then I want to go to the other place.