lo (interjection \ˈlō\): used to call attention to something, or to show wonder or surprise

I think I should start using the word “lo!” more often, in the sense of “look! see!”

“Lo! The letter carrier has arrived!”

“Lo! The copier is jammed again!”

Eddie Izzard on the naming of Engelbert Humperdinck

His name changed from Gerry Dorsey to Engelbert Humperdinck. I mean, I just wanted to be in the room when they were working that one through: At the risk of coming off as culturally insensitive, something I strive to avoid, I just discovered a non-English word that genuinely makes my heart glad. I plan to use it every day for the rest of my life.

One of our local supermarkets is owned by the local Ojibwe band. The market is going through a major expansion and remodeling, and features signage that displays the department names in both Ojibwe and English. And as it turns out, the Ojibwe word for “dairy” is “Doodooshaabooniwang.”

This is now my all-time favorite word. This replaces my previous favorite word, “dondurma,” which is Turkish for “ice cream.” Good thing I’m not lactose-intolerant.

I can’t tell you how happy I am to have learned this awesome word.  It’s like the chorus from a 1960s girl-group song:

And of course the fact that it features both “doo-doo” and “wang” greatly amuses the eleven-year-old kid inside my head.

I can’t wait to use it. “Honey, do we need anything from the doodooshaabooniwang?” “Yes, dear, please pick up some dondurma..”

When my adorable niece Nolia was an adorable wee tyke she was already quite verbal. Describing a trip to the doctor for a checkup one day, she couldn’t remember the word “thermometer” and referred to it as a “hermackadoo.”

I think that’s brilliant. “Hermackadoo” is a much better name for this device. I’m going to start calling it by that name whenever I go to the doctor. I think you should too.

“Burn one, drag it through the garden, pin a rose on it and send it to Wisconsin!” 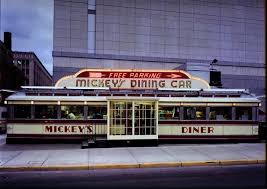 “The gentleman will take a chance!”

“Mouse trap with red paint in the alley, c-board it!”

“Black and blue, firehouse it and make it cry!”

“Frog sticks in the alley!”

“Radio on a cable car, peel it off the wall, and a splash out of the garden!”

“Drown the kids on a raft!”

“Jack Benny with a hot blonde in the sand!”

One of the few pure American styles of jargon. My great aunt ran a small diner in East Central Minnesota. My grandma (her sister) helped her run it, and I worked there several summers busing tables and mopping floors. All the cooks and waitresses used the diner lingo.

I agree with a poster on another site (long since forgotten) who said the point behind diner lingo was NOT efficiency or creating mnemonic devices. What’s efficient about using six or seven syllables to refer to “ketchup”? No, communities always define themselves by their language. Helps the insiders recognize one another, and keeps the outsiders out. Plus it was cool: my cousins and I would recite the slang terms around our homes. (Once when the milk carton was empty at breakfast, our uncle Jim noted that we had “killed the cow.” We thought it was the greatest phrase ever. Our moms grew to hate it.) Plus it allowed the cooks and waitresses to “dish” on customers (ha! see what I did there?) without being detected.

Wikipedia has a great glossary. These are a few of my favorites, with comments:

Adam and Eve on a raft and wreck ’em: two scrambled eggs on toast. The same, on a log: with sausage.

Black and blue: a steak cooked quickly over very high heat so that it is seared  on the outside and rare on the inside.

Burn one, drag it through the garden and pin a rose on it: hamburger with lettuce, tomato and onion.

Customer (or the gentleman) will take a chance: hash.

Don’t cry over it: omit the onions.

Eve with a lid on: apple pie. The same, with a moldy lid: serve with cheese.

Firehouse it: add chili sauce to an item.

Fry two, let the sun shine: two eggs fried on one side, unflipped with unbroken yolks which are generally runny.

Hope: oatmeal. (I would love to know the derivation of this one.)

Hot blonde in the sand: coffee with cream and sugar.

In the alley: served as a side dish.

Jack Benny: cheese with bacon. (I would love to know the derivation of this one too.)

Keep off the grass: no lettuce.

Million on a platter: a plate of baked beans.

Mother and child reunion: chicken and egg sandwich (reportedly where Paul Simon got the idea for his song).

One on the city: a glass of water.

Paint it red: put ketchup on an item.

Peel it off the wall: add a leaf of lettuce.

Put out the lights and cry: an order of liver and onions.

A spot with a twist: a cup of tea with lemon.

Jitterbuzz has a list that adds some not found on Wikipedia.

C-board: An item prepared for takeout (in cardboard). Also: it’s going for a walk; ninety-seven; put legs on it.

Hounds on an island: Frankfurters and beans.

Side of shoes: Order of shoestring potatoes.

Splash out of the garden: Bowl of vegetable soup.

Zeppelins in a fog: Sausages in mashed potatoes.

Are there regional ones that aren’t in these lists? Or did you ever work in a diner and come up with your own? Spill.

And this is the best example I’ve heard in a long time.

Video of TV series “Wings” from You Tube.

It’s crackers to slip a rozzer the dropsy in snide.

“For the smarter kids of two generations, Mad was a revelation: it was the first to tell us that the toys we were being sold were garbage, our teachers were phonies, our leaders were fools, our religious counselors were hypocrites, and even our parents were lying to us about damn near everything. An entire generation had (publisher) William Gaines for a godfather: this same generation later went on to give us the sexual revolution, the environmental movement, the peace movement, greater freedom in artistic expression, and a host of other goodies. Coincidence? You be the judge.” – Brian Siano, The Humanist magazine, 1994

I was reading when I was four, before starting kindergarten. I was looking at the page of a newspaper one day when something clicked; all the lines and circles and squiggles suddenly made sense to me as letters and words. So I was reading very early, but not with discernment. Not with objectivity. Some would say that I still don’t.

My uncle Howie lived with my grandparents in a little house in Barnum, MN. Howie, being a teenager in the 50s, read Mad magazine. They were usually left in Grandma’s living room, an attractive nuisance for a precocious four-year-old who suddenly had gained the magical gift of reading. But: no discernment, no objectivity, no filter, no concept of parody or irony.As a result, everything I read in Mad I took at absolute face value and absorbed everything written there. Eventually my mom demanded that her kid brother hide them when we came to visit. Before that happened, however, I discovered this phrase:

“It’s crackers to slip a rozzer the dropsy in snide.”

It was a nonsense phrase that one of the Mad writers discovered in an Australian gumshoe novel. Margery Allingham wrote a series of books featuring detective Albert Campion. His trusty sidekick was Magersfontein Lugg, who originated the phrase in the novel The Fashion in Shrouds. The sentence means, “It’s insane to try and bribe a policeman with fake money.” But no one knew that.

Gaines loved it and saw to it that it was peppered throughout each issue, generally apropos of nothing. When a reader’s letter begged Mad to explain it, the editor helpfully replied: “‘It’s crackers to slip a rozzer the dropsy in snide’ is good advice.”

The phrase “went viral” in the late 50s, like so many other bits of Mad-ness.  It was carved on park picnic tables, scrawled on bathroom walls, and written in on the margins of school textbooks. Smartass adolescents would say it when there was nothing else to say:

Teacher: “Billy, why didn’t you finish your homework?”
Billy: “It’s crackers to slip a rozzer the dropsy in snide.”

Father: “I thought I told you to mow the lawn!”
Howie: “It’s crackers to slip a rozzer the dropsy in snide.”

Parent: “Can I count on you to have my daughter home by 11?”
Scotty: “It’s crackers to slip a rozzer the dropsy in snide.”

Bart Simpson would have loved it.

Fifty years after Mad originated it, and some forty-seven years after my uncle was ordered to hide it from me, I introduced my ten year-old nephew to this subversive phrase. He was instantly delighted and put it to immediate use when his mother told him to clean his room. And so the circle of life begins anew. Did I do him an unwitting disservice? Will he use it to sow discontent and foment dissent? Perhaps. But on the other hand, it’s crackers to slip a rozzer the dropsy in snide.

Word of the day: “Bejiggity”

From the excellent blog Girl on the Contrary.

Try to work “bejiggity” into your vocabulary today.

May I mambo dogface to the banana patch?

Back in the 70s when he was still doing stand-up, Steve Martin had a bit where he speculated on how funny it would be to teach a little kid all the wrong words. So once in kindergarten, the teacher would freak out when the kid raises his or her hand and asks, “May I mambo dogface to the banana patch?”

Try to work that into your vocabulary today. “May I mambo dogface to the banana patch?” Another good one is “It’s crackers to slip a rozzer the dropsy in snide,” but I’ll save that for another day..