I wish it were not true, but 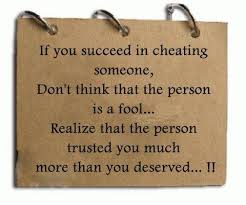 it appears that liars and assholes are rewarded in this world because they cheat. I find this entire concept very difficult to explain to my young nephews. In our world cheating and being an asshole is wrong, yet these liars and cheaters get ahead. Does that make a damn bit of sense to anyone?

Here’s one to ponder: $1 spent in a locally-owned store creates $5 to $14 worth of value before it leaves the community.

Posted: December 7, 2012 | Author: Scott McKinney | Filed under: "It Seems To Me" | Tags: integrity, ponderables, stand for something | Leave a comment

The result of buying locally is a more sustainable community with local businesses that are owned by local people who are less likely to leave, and are more invested in the community’s future. And studies have shown that when you buy from locally owned business, rather than a national organization, significantly more of your money is used to support other local businesses which continues to strengthen the economic base of the community.

In Northwest Earth Institute’s Choices for Sustainable Living Tim Mitchell states, “A dollar spent at a locally owned store is usually spent 6 to 15 times before it leaves the community.”  That means that when you spend a dollar at your local coffee shop, you create $5 to $14 in value within that community. Mitchell further states, “Spend $1 at a national chain store and 80% leaves town immediately.”

Yet another good reason to shop local.

Posted: November 22, 2012 | Author: Scott McKinney | Filed under: "It Seems To Me" | Tags: holidays, integrity, stand for something | Leave a comment

Image from Christians Tired Of Being Misrepresented

My President laid down the smack on some chump from Bloomberg News today.

Twenty-four hours have passed. Time for me to stop the gloat.

Posted: November 8, 2012 | Author: Scott McKinney | Filed under: "It Seems To Me" | Tags: integrity, stand for something | Leave a comment

Inspired and fueled by comments today at Democratic Underground.

This morning, the TV news and several political websites showed photos of Romney/Ryan followers at various Election Night rallies, capturing their facial expressions upon learning that Romney had conceded the race to President Obama. Expressions of disappointment, devastation, and dashed hopes.

Don’t get me wrong: I enjoy being an older white male who isn’t in the Republicans’ demographic. Yet I sympathize. I’ve been in their shoes so many times: crying on election night (or out getting plastered and crying) because some jackass Republican got handed the keys to the kingdom. Humphrey, McGovern, Carter, Mondale, Dukakis, Gore, Kerry. I know what it’s like to feel as if the world is over and Satan won.

It made me sad because it shows how many of my fellow citizens have been manipulated and deceived by Republican extremists: Rove, the Koch brothers, and the Bush/Cheney machine. I feel sadness for these victims of Republican delusion. They have followed politicians and pundits who lead them down a path that will never benefit them.

They believed that Romney was their great hope: a man who lied to them, betrayed them, and doesn’t give a crap about them. They believed that Mitt was the agent for change they were looking for. Misled by a candidate who was everything to everybody.

All I could think of when I looked at them was that it could have been me. I’ve been involved with too many losing campaigns to take pleasure in seeing rank-and-file supporters of any candidate be crushed when their candidate loses. Almost all of us over the age of 25 have been those people at some point, and it’s a really crappy place to be in. I’ve been down that road too many times in the last four decades. I know how it feels to have our guy not win, and it was pretty awful. I don’t wish that feeling on anyone, especially not rank-and-file voters and activists who put their heart and soul into a campaign they believed in.

Now I know that had Romney won, and exercised his scary agenda, and it finally sunk in how awful his intentions were, they’d be much, much sadder. But at the end of the day, we are all Americans. These people are our fellow citizens, co-workers, and neighbors.

Time’s up. No more schadenfreude. Time for us to pull together.

Yeah, this is what I’m talking about.

I rarely shop at Nordstrom because I rarely visit Mall Of America. But I’m spreading the word. We need more of this. The holiday creep is getting worse and worse every year. I bought my Halloween candy in a store where Christmas carols were wafting out over the loudspeakers.