Wherein I reinforce avoiding a particular vocational path, performed my own interpretation of “Shit My Dad Says,” pay tribute to two idols at once, perspire like our 37th President, and conjecture on Iowans’ driving abilities

The day dawned bright and crisp and fine in Clear Lake, Iowa. Sadly, I didn’t greet it as I was still asleep.

Got back on the road at about 8:30 am. I had chosen to travel through Iowa instead of my normal Wisconsin route as I had heard there was significant snowfall and poor travel between Madison and Rockford, IL. Well, if that were actually true I can’t imagine it was worse than traveling through east central Iowa. It was like a war zone. Travel on interstate highways was down to one lane for several hours: if there was a second lane, it was generally coated with ice.  I lost count at 100 cars, trucks, and semis in the ditches. Some of them had rolled over, and I can sympathize. Right around Cedar Rapids the temperatures climbed above freezing, and the improvement in road condition was dramatic.

My dad had a relatively mild (for him) epithet for pokey, oblivious drivers. He termed them “goddamn duds.” Well, he would have had more of his share of goddamn duds on the road this day. Not just on the snow-narrowed roads, but even on the dry and clear straightaways. I’ve devised a working theory about why Iowans drive like they do. At first, I suspected that it was difficult to steer with their elbows because they had both thumbs jammed up their asses. I determined that it’s more basic than that. I don’t want to commit to anything, but it’s diagnostic that they own motor vehicles and DON’T use them to LEAVE IOWA. Draw your own conclusions.

Crossing over from Iowa into Missouri I was able to give a tribute to two geniuses at the same time. I was driving on US Highway 61 which of course called for as many lyrics as I could remember of Mr. Zimmerman’s “Highway 61 Revisited”: 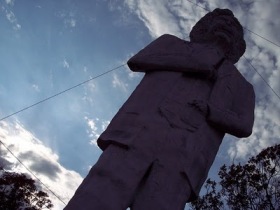 And 61 leads right through Hannibal, past a huge roadside statue of my favorite author Mr. Clemens, so I gave him his propers as well.

Fourteen hours’ driving. Should have taken nine or ten. Long drive. Long, long drive. Too many goddamn hours behind the wheel. I know right now that I can never be an over-the-road hauler.

A white-knuckle trip through downtown Saint Louis. As Rachael Ray would say, I was “sweating like Nixon.” Still a little shell-shocked from recent driving experiences. I did get to see the Arch lit up at night, though, which was spectacular. If you ever get a chance to ride to the top in it, I highly recommend it.

More driving: Illinois, Indiana, finally crossing the bridge into Kentucky at about 10 pm. Found my way to Mom’s house. Mom, sister Mary, bro-in-law Pete, lovable niece Nolia, and good dog Lady had all stayed up to welcome me. A pint of cider and an hour or so of stories and jokes, and the day caught up with me. All was calm, all was bright.

A hellacious day’s trip, yes. Would I do it again? Oh, hell yes.

Christmas In Kentucky, Chapter I: The Departure 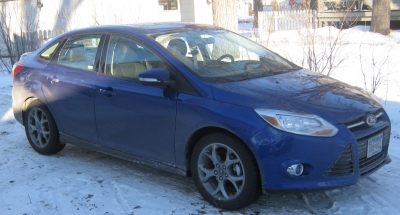 Wherein I relive the joys of Saint Paul rush hour, dine at a McDonalds whilst it was still being built, brave the fierce elements, and rediscover a dormant but prodigious talent

Off to Kentucky for Christmas with Mom, sister Mary, bro-in-law Pete, and adorable niece Nolia. I am still carless after the collision, so have rented a sweet little 2013 Ford Focus. This is a live ride. I may not give it back.

The office closed at noon. And after a stop at the radio station holiday potluck, I eventually got on the road by 3 with every intention of reaching Missouri by dusk. I-35E traffic in Saint Paul during Friday afternoon rush hour had different plans, though. I was nearly to Faribault before the interstate stopped resembling a parking lot. Road rage was surprisingly absent, though, which is remarkable.

Image from timesunion.com –  Not the actual Medford McDonalds

In Medford my windows began to frost over, I was hungry, and I needed to pee. So I pulled off the interstate, onto a goddamn roundabout (which I despise), and into a (seemingly) friendly and welcoming McDonalds. Bad choice. Apparently the lighted sign did not indicate a restaurant ready for diners. Although the McStaff was serving food to a crowded line of customers, the McConstruction Workers were still building the place: hanging drywall, installing ceiling lights, prepping the floor for tile. There was one bathroom and the line was understandably immense. Cold weather caused most of the diners to eat in, and we all sat at church-basement folding tables and chairs. I understand their desire to serve holiday travelers, but this was a McMistake.

Continuing on down the interstate, my windows continued to frost over. As I approached Albert Lea (home town to Al Franken and nearly into Iowa), the roads became more slippery. As I crossed the border, they became glazed. I pushed on another forty miles to Clear Lake (best known as the place where Buddy Holly et al died in a 1959 plane crash), drove gingerly onto the exit ramp, and took my rest at the AmericInn. 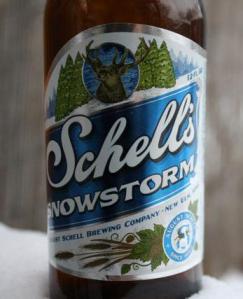 I’m disappointed that I didn’t make it into Missouri. But my dad was famous for saying, “Just find out how many miles the road will give you.” Good advice, Dad.

On the plus side: for road trip music I busted out some mix CDs I burned four or five years ago. God damn, but I make some fine mix CDs.

So. Sitting back, chillaxin’, quaffing a Schell’s (coincidentally named) Snowstorm. Their winter seasonal is different each year, and this time around they’ve created a Biére de Garde. Very very nice.

Yes, the holidays have begun. With luck and an early start, Kentucky tomorrow afternoon.