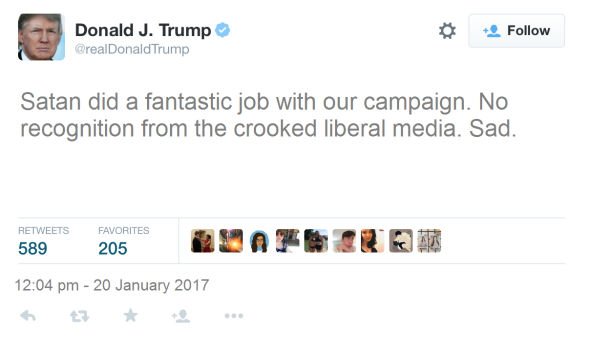 I’ve been getting this a lot lately.

Time to address it head on.

“What’s the deal with you Democrats, anyway? Why do you need to be so negative and pessimistic about Trump? We may not have liked Obama, but we were never so loud and radical and ornery and downright uppity as you are! Why can’t you give the guy a chance, like we did for the sake of the country?!?”

Do you realize what you actually just told me?

YOU LIKED ALMOST EVERYTHING OBAMA DID.

Yeah, I’ll let that sink in for a moment.

It’s very obvious that you approved of most of Obama’s agenda, proposals, and initiatives, or at least you didn’t disapprove of them enough to get off your dead ass and do anything meaningful about them. Passive-aggressive simpering and keyboard crusading don’t count.

If you seriously believed anything Obama did to be a real threat to our country, you’d be doing the same thing the left is doing now: taking it to the streets.But you didn’t, and you’re trying to brag about that.

Climb down off your high horse. Don’t make a virtue out of your indifference. Your failure isn’t any sign of patriotism or moral superiority – it simply means you didn’t mind Obama that much at all.

Now that Thanksgiving is over –

I continue to hear and read comments from people talking about Trump. Saying things like: “She lost. Get over it. Suck it up, buttercup.” And: “Things can’t possibly go as bad as you think they will.” And: “He hasn’t even taken office yet. Won’t you just give him a chance?”

That last one is the one that sticks in my craw. This election has profoundly changed me. I’ve seen people’s true colors, I no longer suffer fools gladly, and I’ve forgotten the words to “Kum-ba-yah.” The “give him a chance” people have forgotten how horrifically they treated President Obama and his family for eight long years.

But I’m a reasonable man. I’d consider giving Clownstick a chance if one, only one conservative Republican came up to me and said something like the following:

“You know, we were really too hard on President Obama. We gave him a pounding that he or any other President never deserved. We whipped up people’s hostility about him being the first black President. We spread lies, claiming he planned to do things that he never even thought of doing. We agreed among ourselves to block everything he tried to do, and even boasted about it openly. The things he was able to do, we whittled and chipped away at so that it didn’t come close to what he intended. We insulted and demeaned his wife and daughters. We even told the world that he wasn’t even born in this country.

“We screwed up, and I am very sorry. I wish we hadn’t done those things. Obama was actually a very good President. In particular, I’d like to commend him for the following acts: (fill in blanks here).”

If just one conservative Republican would say these things to me, and sincerely mean them, I would just as sincerely consider lightening up on Trump and giving him the chance they denied Obama. That’s all it would take.

But, to quote the always wise Susie Derkins:

Thursday night, an individual speaking under condition of anonymity alleged that President-Elect Donald J. Trump eats his own boogers.

Is it true? We don’t know. But apparently people are saying it. It is certainly worth investigating. If true, this sets a terrible example for American children and our allies around the world.

Won’t you please help spread the word about how Donald Trump eats his own boogers? Please share. Our fellow citizens deserve to know. Thank you, and God bless the United States of America.

“And the blood of your children is all that I require.”

I have several good friends, dear friends, who are still undecided about who to vote for next month. I will never, ever forsake a friendship over politics. My friends are too valuable to me to discard over a principled agreement.

That said: indirectly supporting Trump by sitting out the election is the same as intentionally supporting him. This is no longer a principled agreement. I understand wanting to vote your conscience. But I don’t understand how your conscience will leave you alone if you don’t do everything you can to prevent him from becoming President.

“You mean… you could have helped prevent THIS… and you DIDN’T?”

Help us help you, Donald. 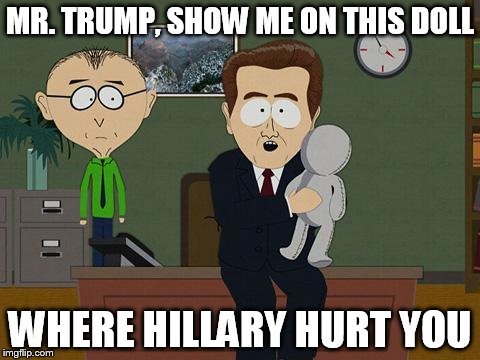 Don’t they get it?

After all, they say, you save that for when your team wins the Super Bowl.

I said GO and GO I prayed….
The time had come.
BUT…Donald STAYED.