The purpose of karma is to force us to learn life’s lessons, whether we want to or not.  – Arthur Yensen 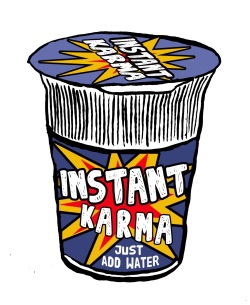 Scoundrels are pissing me off today. People who act like assholes, and still glide merrily along in life. They’re everywhere, the bastards. I’ve started to question whether karma exists. Are people who treat others like shit always able to soar away, free as birds? Doesn’t a scoundrel ever get his comeuppance? Where, then, is the percentage in trying to live one’s life with openness and honesty and a sense of responsibility and compassion? Why bother? Some people say: virtue is its own reward. To them I repeat: screw that shit, gimme that Instant Karma.

It makes me angry because I prefer the scales to be righted. I don’t treat anybody in a way that I wouldn’t want to be treated. It’s how I roll. Things seem imbalanced when the scoundrel never has to be held accountable for his shitty actions.

I guess you have to trust that the scoundrel may already have gotten his consequences, though they may not be visible. It might be that karma isn’t shown to others, that it’s something we go through individually. So while he may prosper in our eyes, we don’t see what he’s going through “behind closed doors” or internally. Even if he seems happy, the things that make him a scoundrel are borne out of a shitty frame of mind. Peeing in the pool that he’s swimming in. Stinkin’ thinkin’, as the twelve-steppers put it. Which is to say, the suffering is already happening to him. As a former boss used to put it, “They’re the ones that have to live their lives.”

Maybe the takeaway is that karma assures us that it’s not our job to right the scales, that life will make reprisal.  A scoundrel will get exactly the kind of life he deserves, and may actually have it already. You don’t need to wish unhappiness on him to be fairly certain that it’s coming his way.

Still, a wee bit of karmic validation from the universe would go a long way. Toss me a scrap, okay?!